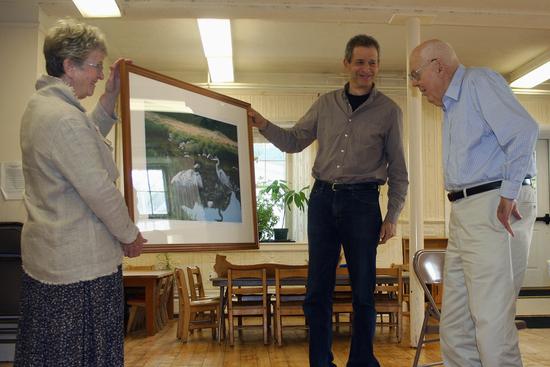 “I have never met nicer people than those who work at the Tree of Life,” said Will Rosborough, who has stepped down from the organization’s board of trustees. He spoke at an October 13 celebration, held at the First Congregational Church of Blue Hill, for the more than 100 volunteers who contribute to the food pantry—and received some gratitude of his own. “Will’s been serving in some capacity for somewhere around 100 years,” said board member Brenda Means. Above, she and volunteer Rick Traub presented Rosborough (right) with a large, framed photograph from the board in appreciation of his service. Several volunteers offered their thoughts, including Sandy Snow, an 11-year volunteer: “I’ve always thought of Will as the glue that holds the Tree of Life together.”