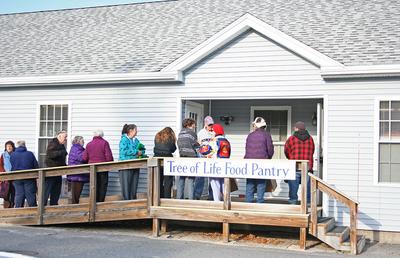 Customers begin lining up at 7:30 a.m. on Thursdays, when the food pantry is open, for the doors to open at 9 a.m.

Sitting down at a table groaning with food for a Thanksgiving meal is an American tradition. But 14 percent of the Peninsula’s population, according to statistics compiled by the Tree of Life food pantry in Blue Hill, need help in feeding their families each year. Over 10,000 families totaling over 26,000 adults and children used the food pantry last year.

“The numbers are growing almost drastically,” said Treasurer Brenda Means. “It’s not unusual for us to see 15 to 16 new families each week.” She pointed to the December 1 closing of the Verso paper mill in Bucksport, which employs 570 people, as one possible reason.

The Tree of Life food pantry serves people in Blue Hill, Brooklin, Brooksville, Castine, Orland, Penobscot, Sedgwick and Surry, but turns no one away, she said. Open on Thursdays, people begin lining up as early as 7:30 a.m. for the 9 a.m. opening.

But some Peninsula residents don’t even realize the food pantry exists.

“I’ve talked to so many people here who haven’t heard of the Tree of Life,” said Sean Dooley who supplies eggs and greens to the pantry from a greenhouse and farm partly funded by a Maine Community Foundation grant. “If people don’t know about it, they can’t help.” And those who have heard of the food pantry don’t realize “how much of the community it serves.”

The Tree of Life was begun in 1987 by the First Congregational Church of Blue Hill mission board, and moved into its current home on South Street in 1994, after property was donated to the organization, when it also became a nonprofit 501(c)(3) organization.

It uses proceeds from its used clothing store, TurnStyle, to buy food and cover, in all, 60 percent to 70 percent of operating costs. Approximately 130 people volunteer their time and services to the pantry and TurnStyle.

“I get food here so I feel better volunteering and helping out,” said Dannie Grindle of Brooksville on a recent Thursday. “And it’s my social scene.”

Means began volunteering seven years ago, giving an hour or two at TurnStyle, before quickly joining the board and becoming treasurer.

Right now, the numbers are not looking great.

Means said that this is caused not only by more customers but by rising prices. “That’s what we’ve been told is coming,” she said, by Good Shepherd Food Bank, which supplies a good portion of what the Tree of Life buys.

Sales at TurnStyle are helping balance the finances, Means said, with “a phenomenal increase” from $132,207 in 2013 to $140,089 this year. Part of the reason for the revenue increase is that more people are shopping at TurnStyle.

“We have a much greater demand [for clothes],” she said. “I think people are frightened. We’re seeing local people we haven’t seen before.”

Clothing donations are not keeping up with demand, at least for winter clothing. “Donations are down this year. At one point, substantially down,” Means said. In their upstairs “linen closet,” a small rack of winter coats and about three pairs of children’s snow pants wait to be hung on the store racks, while typically “there’s lots” at this time of year.

Donations to Tree of Life can be made at its website treeoflifepantry.org/donate or mailed to Tree of Life, P.O. Box 1329, Blue Hill, ME 04614. Clothing donations may be placed in the TurnStyle drop box.

“We operate, I truly believe, on a series of miracles,” said Means. “Somehow things manage to happen. I have to believe that or I would not sleep at night.”