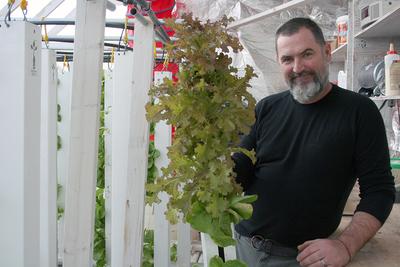 Lettuce and other greens grow faster and use less water.

Sean Dooley, the driving force behind Misty Morning Farm in Blue Hill, has quickly put a $10,000 community food grant from Maine Farmland Trust to use. Awarded the funds eight months ago to build a passive solar greenhouse to grow produce for local food pantry Tree of Life, Dooley uses a vertical growing technique and aquaponics to maximize yield and growing cycles.

But first, he had to buy the farmland, lay in power lines, dig a well and build the greenhouse. No sooner said than done.

“We spent the grant in one day,” he said, on materials to build the greenhouse and 100 vertical towers. He donated his own labor, and continues to do so, as well as funding everything outside of the grant.

Misty Morning Farm was created on 3.5 acres of reclaimed farmland. Its model allows it to be a one-man operation.

“Because we set this project up based on one person’s labor, we wanted it to be as efficient as possible,” Dooley said.

He built the 240-square-foot passive solar greenhouse himself, receiving a discount on materials from EBS and on the vertical growing towers from the Oregon company that makes them.

Each tower grows eight to 10 plants, producing around 200 plants of lettuce, kale, Swiss chard and bok choy per week. With plants needing four to five weeks until they are ready to harvest—“a little bit quicker than if we were growing them outside”— Dooley plants on a rotating cycle. On tap for next spring is adding an additional block of towers to produce even more.

Dooley also grows “fruit-bearing” plants, such as peppers and tomatoes, in wicking beds. The idea behind high density, vertical farming aquaponics and a passive solar greenhouse is to keep a “low footprint,” in both energy and water use while growing for around 10 months a year, Dooley said.

Aquaponics uses a fraction of the water that regular agriculture uses, feeding vertical plants through hoses that carry water from tubs placed on the greenhouse floor. In the wicking beds, water is poured into the bottom where rocks and porous fabric are placed beneath the dirt, “which creates a space that fills with water,” with the roots of the plants reaching down for the water.

The farm also is home to 60 chickens (and two goats), supplying Tree of Life with about 20 dozen eggs each week. Dooley, who plans on adding 40 more hens next year, gets some help from his daughter Erin, a second grader at Blue Hill Consolidated School, whose nickname now is “hen whisperer.”

“I collect the eggs and I clean [the coop],” she said, before chasing after an errant hen that flew over the fencing.

“It’s all a community service effort on their part,” said Means. “They just show up with eggs and greens and a smile on their face…Sean is a miracle man.”